Promo 1 - Get our lifetime membership, all themes, and updates forever for only 95 USD.
Promo 2 - Get a free pro theme when you host with us.

When I launched the PostMagazine Pro theme back in December of 2017, there was just something bugging me about the overall design of the theme. Still can’t quite figure it out even today, but it was enough for me to make the decision to redesign it from the ground up. What I can definitely say now is that it’s a lot better than the first release.

I think it was more about the overall design and colour scheme I had used for it, but to give you an idea of the before and after, I made a screenshot to show the pairing side-by-side: 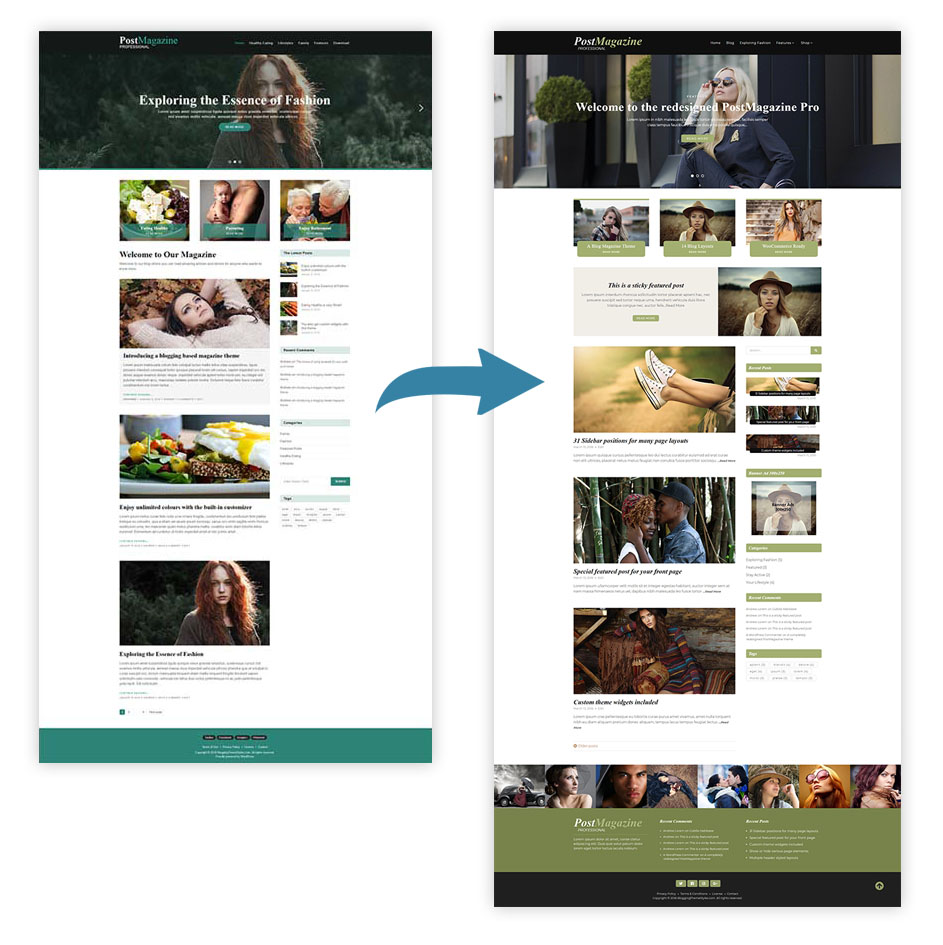 I tried to keep the concept of the theme in place while making major changes (for the better of course) to the theme.

As I mentioned, this theme was completely rebuilt from the ground up, so here is a list of changes…

Lots of changes as you can see. I still might do more as time goes on because even though the theme has already been popular, the changes made here will more likely become a top selling theme from Blogging Theme Styles.

What if you Have the Previous Version Installed?

I normally do not like making big changes to a theme that is already being used because when you upgrade to the new version, you will have to make some adjustments to your site. So fair warning, if you decide to replace the previous version with the new one, you will have some adjustments to do. The slider will be one, any colour changes you’ve done from the customizer might need redoing, and maybe the odd fix with other option settings. But for the most part, you should be OK.

I do RECOMMEND that you make a full site backup first before switching to the new theme.

How to Update the Theme?

Updating the theme can be done in one of two ways, either with an FTP program and method, or using a WordPress plugin that let’s you do that without having to use FTP; it works using the WordPress installer. For more information, check out my article about Updating Your WordPress Theme.

I believe the new design is a lot better and will definitely become more popular now that I made the changes that is really needed. Please let me know your thoughts on Twitter, Facebook, or Google+ ….and if you decide to share this post as well, it would be a big thank you!

The WordPress Gutenberg Editor will change how you create Posts

WordPress is going to Change because of the Gutenberg Editor