Promo 1 - Get our lifetime membership, all themes, and updates forever for only 115 USD.
Promo 2 - Get a free pro theme when you host with us.

Are you looking and waiting for the next new and fancy WordPress Twenty Eighteen theme? I know I’ve been curious about it because it seems as though there is very little in talk or even movement on the development of one. Just like you, I’ve been anticipating to see what the core WordPress team have in-store for us since Twenty Seventeen was released what seems to be a long time ago.

Just a while ago it seemed like the team over at Automattic were ready to release WordPress 5 with their new Gutenberg editor project. Turns out as of this updated article, it looks like it’s held back….and judging how things are going with many issues to solve, I’d say we could be looking at 2019. This new fancy editor that you may or may not have heard about is supposed to completely change how you make posts and pages with an editor code named “Gutenberg” which I wrote an article called “WordPress is About to Change because of the Gutenberg Editor“.

I won’t go into the editor talk right now because that in itself is a massive topic…especially with the controversy and dislike for the complete replacement of the current TinyMCE editor. But ultimately, with every major version of WordPress, we’ve always seen a new default theme included. We have Twenty Ten, Eleven, Twelve, Thirteen, Fourteen, Fifteen, Sixteen, and the latest default theme called Twenty Seventeen. 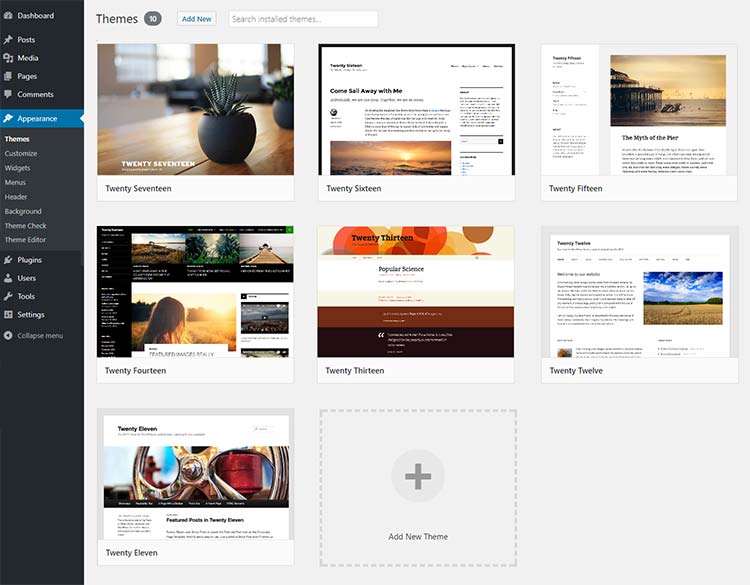 Generally what happens each year is a new default theme is released by the WordPress team, usually by someone who dedicates their creative ideas in the form of a new theme. It’s inevitable that we will see the next up and coming default theme for WordPress as we approach 2018, but the question is “how long will it take to see news of this and the first beta release?”

Since Twenty Seventeen was released, it has definitely made a huge hit as popularity continues with everyone. At the time of writing this post, current active installs is over 1 Million! which means websites that currently have this theme active. However, looking at downloads, the Twenty Seventeen theme appears to be averaging around 3800 per day — which is still an insane number. Based on what I can see, the 2017 theme is by-far the most popular theme due to the exceptional design and functionality that was brought to use when 2017 was released to the public. So the real question comes back as “Will a WordPress Twenty Eighteen theme be coming?”

At the time of writing this article, it’s already October 2017 and hardly a peep about a Twenty Eighteen theme. I did talk briefly with someone in the WordPress Slack chat who mentioned they submitted a proposed concept and are waiting to hear back. I believe the idea is to get something started, so I guess only time will tell if something kicks into gear with the development of a new default theme. If I hear anything more, or perhaps if you hear anything about a Twenty Eighteen theme, I will update this article.

As a side note, I would love to build a theme and call it Twenty Eighteen, but I have a feeling that Matt from Automattic would not be too pleased with that idea considering they’ve named their default themes by the years: Twenty Ten, Twenty Eleven, Twenty Twelve, Twenty Thirteen, Twenty Fourteen, Twenty Fifteen, Twenty Sixteen, and Twenty Seventeen. Best to wait for them to do their thing—whenever they decide to catch up on their project(s).

In the meantime, if you are looking for free WordPress themes, we are still submitting them to the theme directory at wordpress.org, but you can check out our current list of Free WordPress Themes and even the more recent and popular one called “PostMagazine“.

I should mention that even though this won’t be an official Twenty Eighteen theme, I am working on a new blog theme right now that focuses on the features of WordPress.

Plans and Pricing have a new member